Fred Yates (1922 – 2008) was a Lancashire-born artist famous for his naïve style of art. Yates is affectionately known as the 'Happy Lowry'. Below is a Fred Yates painting for sale which originates from his studio sale in Paris 2014. 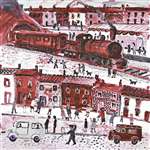 Frederick Joseph Yates was born in 1922 in Lancashire and became famous for his naive style of art. He moved to France in the 1990's but sadly died on his return to England in 2008.

Yates was self-taught and developed a unique style of loose brush strokes and bold colours, often applying paint to the canvas straight from the tube. Born in Urmston, a suburb of Manchester, Yates began by painting industrial scenes of the city. A move to Cornwall in 1968 saw a change in subject matter with paintings of coastal scenes and rural village life.

After moving to Rancon in France, Yates continued to paint right up until his death in 2008. His works are housed in a number of museums including Liverpool University, Brighton and Hove Art Gallery, and the University of Warwick. 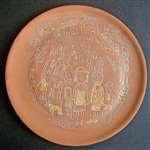 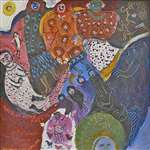 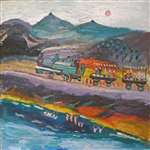